Playing Candy Crush At Work Is Good For Business? 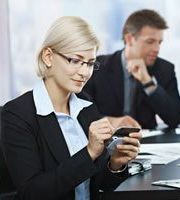 To us this sounds crazy! but a recent study tells us that you shouldn't feel guilty for playing on your smartphone at work. Really?

A recent study shows that smartphone breaks will not only make you happier, they’ll make you more productive too.

Though it might seem like perusing Twitter or trying to make it to the next level of Temple Run would interrupt workflow, a recent study shows that that’s not the case. Sooeyol Kim, a doctoral student in psychological sciences, studied the smartphone usage of full-time employees during work hours. What he found was that those who took more frequent smartphone breaks (however mind-numbing the activity may be) were more productive and reported a better state of well-being at the end of the day. Though the breaks were frequent, they averaged a total of only 22 minutes out of the eight-hour workday.

The reason that playing on a smartphone had these positive effects is relatively simple: it gave workers a chance to focus on something other than their job tasks, decreasing their stress and refreshing their minds. But before you go on an hour-long Pinterest binge in the interest of improving productivity, remember that the key is to make the breaks brief and frequent. Just playing for a few minutes will be enough to re-energize you.

So instead of trying to muscle through eight hours of straight work, take some time to play. Your brain (and your boss) will thank you.

Of course you might have to show the boss this article to convince them!

And as always, Contact Printech for any of your PRINT & MARKETING Needs, we can help you to be more productive at work too!